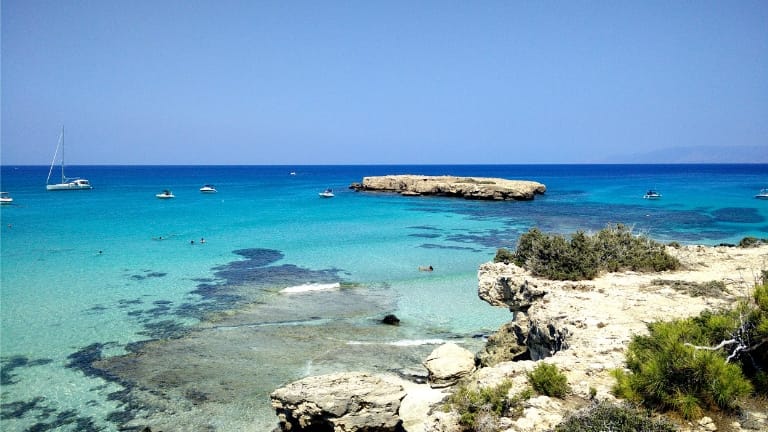 Cyprus is an island in the eastern part of the Mediterranean Sea where everyone can find entertainment to their own taste.

If you have not been to Cyprus, here are 18 reasons why it is worth going there.

Donkeys are one of the symbols of the historical heritage of Cyprus. For many centuries, they were the main form of transportation here. On the Golden Donkeys Farm, there are about 170 of them. Here you can take pictures with these cute animals and feed them. You’ll also find one of the oldest olive trees on Cyprus at the farm.

The Lefkara weaving technique even has a particular name – Lefkaritika. Besides the lace craft, there are about 30 workshops making silver jewelry in the village. Local jewelers create elegant patterns from silver threads to look like lace.

The capital of Cyprus is worth a separate visit. Since 1974, the city has been divided in two by a wall, forming Greek and Turkish sections. It is hotter here than in the coastal region of the island, so come in the evening. Cafes will open after a siesta, so there will be plenty of options to grab a snack while walking around the old town.

On the Polyviou street in the historic center of the city, we found the family cafe Apomero. A cute woman named Antroulla prepares a variety of goodies, and her grandson helps to serve guests. Here we tried the traditional orange pie.

4. Buy a couple of bottles of wine in Omodos village

Cyprus has been involved in winemaking for almost 6,000 years. And one of the most famous wines of Cyprus is the dessert wine Commandaria.

Even if you do not drink, the village is still worth a visit. You can find a shop of handicrafts made of glass. Or walk along the well-kept narrow streets. Enjoy local cuisine and landscapes in one of the cafes on the central square.

5. Climb to the highest mountain on Cyprus – Olympus

The British military base occupies the summit (1,952 m). But from 1,936 meters, near the upper part of the ski lift, the view is also excellent. In clear weather, you will see the sea from two sides – from the north and south.

A few kilometers away is the Caledonia waterfall. In the Troodos Mountains, there are several prepared BBQ areas where you can have a picnic. The air in the mountains is refreshing, so you can rest from the heat on the coast.

6. See the sights of Paphos

In Paphos, you can see dozens of sheltered bays, the Aphrodite birthplace, the Royal Tombs, the Archaeological Park, the Medieval Fortress, the embankment with a vast number of taverns, bars, and shops. The city is located in the southwestern part of the island near the Troodos Mountains, so the climate here is milder in high season.

The historical heritage of the city, which is more than 3,000 years old, is under the protection of UNESCO. Paphos is a popular resort town for tourists coming from Europe and the UK.

Meze is a set of small dishes and snacks in the Eastern Mediterranean. In Cyprus, they prepare two types of meze: fish and meat. This dish is usually served for two or more. Meze ingredients are different from tavern to the tavern, but get ready for the fact that there will be a lot of food. We could not have eaten all that our waiter brought us.

Cypriots care for nature in Akamas National Park. Laws prohibit disrupting the park nature and, so, they do not pave roads here, using only dirt roads. For a trip to the peninsula, it is better to rent a jeep or quad.

In the reserve, you can find unique species of plants and animals. On the peninsula, there are other sights of Cyprus to enjoy: Lara Beach, Avakas Gorge, Aphrodite Bath and Path, Blue Lagoon, and dozens of wild beaches.

9. See the turtles on Lara beach

From May to June, two sea turtles species lay eggs, and after two months, small turtles hatch from them. Thus, if you arrive at the beach in August or September, then you may get lucky enough to see the turtles’ birth. Swimming on the beach is allowed, but you can’t touch the egg-laying turtles or their eggs, and you can’t put umbrellas in the sand because there might be eggs underneath the surface.

10. Take in the view at Avakas Gorge

On the way to Lara Beach, 20 km from Paphos, take a look at yet another natural landmark on Cyprus. During the peak season, many tourists come here to enjoy the views and take beautiful photos. It’s best to come here early in the morning.

This is one of the most remote and beautiful beaches on Cyprus. Getting here is a little difficult because it’s on the Akamas peninsula. There is a dirt road in a terrible state, most of which passes by a rock cliff.

It’s unrealistic to drive a small car and not hit the bottom with the stones here. We checked it out on our own experience. It is better to get to the beach by jeep/quad or by sea on a boat that you can rent in Latsi village (11 km from the beach).

12. Get lucky at Aphrodites Rock

This is a famous pebble beach, which is known for several myths. Aphrodite, the goddess of love and beauty, was supposedly born here. It’s said that whoever swims three times around the rock counterclockwise or finds a heart-shaped stone will then find eternal beauty and love.

During the peak season, many tourists come here via sightseeing buses. To admire the beach to its fullest, plan to arrive early, when the coaches have not yet delivered crowds of stone-seekers and rock-swimmers.

In one or two kilometers from the bay, there are a couple of viewing platforms with stunning views.

13. Walk the streets and beach of Limassol

This is the largest coastal city on Cyprus. Go to the public eucalyptus beach, Dasoudi, with volcanic sand, a smooth entrance, and breakwaters. Walk along the longest promenade in Cyprus and go to the historic center.

14. Explore the ancient city of Kourion

Here you can visit the archaeological park on the site of the ancient polis of Kourion, which was destroyed in the 4th century. It’s located 15 kilometers from Limassol, at an altitude of 70 meters above sea level. The admission price is 4.5 euros.

15. Walk through the evening promenade Finikoudes in Larnaca

It is about 500 meters of Phoenix palms (hence, the name), cafes, and taverns along the sea. The promenade ends near the Larnaca fortress, from the top of which you can see a beautiful view of the sea and the old city.

16. Swim in the sea and watch the aircraft at Mackenzie Beach

This beach is marked by a blue flag for its cleanliness and convenience. It also has the warmest water in the sea among all the beaches of Cyprus we were on.

17. Take in the sunset at Cape Greco

But the most exciting thing is not on the edge but at the top of the cape. It offers a beautiful panoramic view of the sea, the coast with its caves, and Ayia Napa. You’ll find benches and an arbor to watch the sunset.

Like many former British colonies, Cyprus has a left-hand traffic pattern. But this does not bother a large number of tourists who rent cars here. Traffic lanes on large roads are usually divided, and intersections are circular, so you don’t cross into an oncoming lane.

We almost did not see tourists who went to the oncoming lane. But, perhaps, that’s the reason why all rented cars have red license plates. The locals and police are friendly to confused tourists and are always ready to help.

If you have already decided to go, the peak season on Cyprus is from May to the end of October.

Search for a flight to Cyprus.